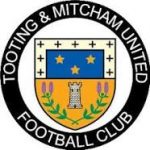 Tooting & Mitcham FC are based in the London Borough of Merton and play at Imperial Fields, Mitcham. They were formed in 1932 by the merger of Tooting FC and Mitcham Wanderers FC.

The club have a strong history in the FA Cup. In 1959, they reached the third round taking Nottingham Forest to a replay which they lost 3-0. There is a great British Pathe newsreel of the home game. Their best was to reach the Fourth round in the 1975-76 where they lost away to Bradford City.

Alex Stepney played for Tooting & Mitcham in the early 60s before signing for Millwall and then later, signing for Manchester United for whom he played over 430 games.