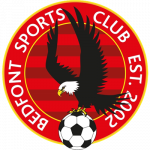 Bedfont Sports are based in Bedfont, West London. They, along with Bedfont FC, probably hold the record for the closest football grounds in the country as their grounds nearly touch.

Bedfont Sports was only founded in 2002 starting out in the Hounslow and District League. A few years later, they moved across to the Middlesex County League before working their way up through the Combined Counties League and gaining promotion to the Isthmian League in 2017/18.