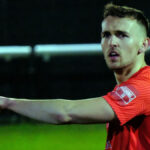 Haylock admitted he was “really pleased” with one of his new recruits Will Shaw, who played the full 90, as did James Beauchamp who scored his first goal since the Tavistock away game at the end of October.

“We asked the players for a fast start and you can’t get much quicker than 90 seconds.”

Harvey Rackley-Hayes, who re-joined the club last month, has played in place of the injured Chris Grace and it was “Only for two excellent saves from Harvey that kept us ahead.”

“At half time we talked about keeping our tempo and discipline and the chances will come.

“The third goal killed the game, and we were delighted to get a clean sheet.”

Haylock also said that it was “Great to see a good crowd at the game and felt this helped towards inspiring the player’s performance, and Friday night’s game is just a step forward before Wednesday night.”