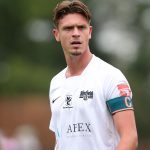 Club captain and striker Sean Moore has informed the club that he will be accepting an offer from Southern Premier League side Hanwell Town.

Sean rejoined the Moles after a spell with local rivals Bracknell Town and was handed the captaincy by the now-Bracknell Town managers Carl Withers and Jamie McClurg during their time at the club. Moore captained us to a glorious season in 2020/21 where the team won promotion from Hellenic League Premier Division, as well as leading the side out at Wembley Stadium for the FA Vase Final, the greatest day in the club’s history.

This season has seen Sean score seven goals in 17 appearances, and will sure be a big miss for the boys due to his ability to lead from the front.

Binfield would like to thank Sean for all of his hard work and effort throughout his time with the moles, and wish him well for the rest of the season and beyond.