The U10 Panthers won their second match in succession after a difficult start to the season the players have improved and are playing some good football. The early defeats did not dampen their enthusiasm with their togetherness being a major factor. 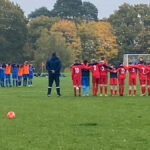 The Chargers first home game at The Parks saw both teams complete a minute’s silence; unified in a moment of respect before the game.

The boys dug deep against a stubborn Hawley side who made it very difficult for the Chargers to play their normal passing game.

The first half finished 0-0 despite the Chargers having much of the possession with the opposition goal keeper making a string of outstanding saves.

Hawley started the second half on the front foot attacking the Chargers goal. The Chargers then started to impose themselves on the game which was then punctuated by a through ball from Jake Nickols; taking a slight deflection, and beautifully falling into the path of Wilson Charles who made it 1-0.

The Chargers now full of confidence quickly found the back of the net again after Wilson completed a beautiful turn and skilful slotted the ball home: 2-0.

The boys continued to battle well as a team until the end with a third goal by Jake in the final seconds of the game.

Captain for the day and MOTM, Callum Knight said: “The whole team worked together to get the 3 points against a difficult side. I’m really proud to have led the team to victory and receive MOTM’.