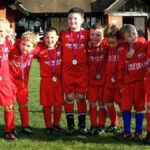 A little bit more history at the end of last week for one of our own as Lewis Hall was back in the Chelsea team in the Carabao Cup.

Hall – a graduate of our famous Soccer School and younger brother of FA Cup hero Connor – made his first start for Premier League Chelsea in the Carabao Cup defeat to Manchester City.

Football in Berkshire’s Dan Walkley was at the game at the Etihad Stadium – just the 53,000 attendance – and said of Hall’s performance: “Lewis Hall’s performance last night was bright energetic and confident in a Chelsea side that has struggled to get going recently. Hall looked to create chances and could have had two goals if not for some excellent goalkeeping.

“A bright future in store for the young left back who will continue to try to break into the Chelsea First Team squad in future. The youngster has already earned England youth honours up to under 19 level.”

Last year Lewis – also a keen cricketer with Binfield Cricket Club – started his sides FA Cup tie against Chesterfield at Stamford Bridge and subsequently became the youngest player ever to start an FA Cup match for the club.

Congratulations Lewis on your debut from all of us here at Binfield Football Club. Find out more about our Soccer School sessions here.