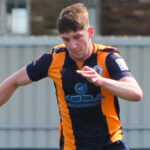 No stranger to Hill Farm Lane, George played 20 times for the Moles last season scoring one goal in the 3-1 win at Guernsey.

A graduate of Slough’s under 23 academy, the midfielder has made nine appearances for the Rebels first team following his debut in August 2021.

A statement on the Slough Town website from manager Neil Baker said: “Having missed a large chunk of pre-season, he has found it difficult so far to get minutes and we feel that a month playing will hugely benefit him.

“We wish him the best in an environment he knows, and look forward to him coming back and challenging for a place.”

George’s last game for Binfield last season came in the 2-1 defeat to Chipstead in April where he played the full 90 minutes.