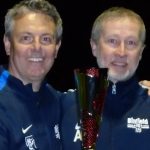 The 2022/23 season sees Binfield FC field an under 23 Development team in the Thames Valley Premier League – whilst initially, this is intended to provide an opportunity for those 18 / 19-year-olds who have just finished their Junior and Youth football journey, in the fullness of time it is hoped that it will further develop the young Binfield talent pool and provide a pathway (along with the resurrection of the u18 Allied Counties side under Nick White and Martin Smith) to senior football, hopefully for some lads at Binfield FC.

Under the management of Andy Harvey, who with Alan Hawkins, has seen a junior/youth team all the way through the age groups from the well-respected Binfield Soccer School to a phenomenally successful u18 season last year where Binfield U18s secured a League and Cup “Double” and the introduction of ambitious and passionate Coach Matt Humphrey, a great group of talented lads has been assembled, and already the bar has been set high and there’s hopefully much more to come.

Several training sessions have honed the squad and there have been four pre-season friendlies against established sides that will be playing in higher leagues, all of which have seen improving performances and confidence-boosting victories.

Binfield will feature in Division 3 with home games played at Kings Academy – watch this space and various social media platforms for their progress.