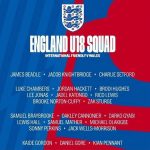 One of our own has earned another Three Lions call up!

Lewis Hall, younger brother of Chorley’s FA Cup hero and fellow former Mole Connor, was called up to the England under 18 squad for a friendly with Wales which the Three Lions won 2-0.

16-year-old Chelsea midfielder Hall was an unused sub in the game – he already has three under 15 caps – but will have gained valuable experience alongside players from Manchester City (including Liam Delap – son of Stoke’s long-throw expert Rory), Liverpool and Manchester United.

Hall played ten times in the under 18 Premier League last season scoring once and has three in two games this season, he has also featured for the Blues in the 2021/22 EFL Trophy.

You can find out more about Binfield’s Soccer School which creates a welcoming environment for children ages 3 and up to year 1 here.

A match report from the Wales u18 vs England u18 game is here.