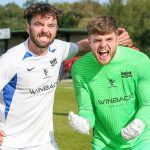 The Moles marched on with another FA Vase penalty shoot-out win on Saturday afternoon.

This time Binfield were away to Hadley of the Essex Senior League and were held to a goal-less draw in normal-time despite a late red card for the home side.

Goalkeeper Chris Grace was once again the hero in the shootout, saving Hadley’s sixth effort in sudden-death after Liam Gavin had scored for Binfield.

The Moles go on now to the Quarter Finals and a long trip to Long Eaton United.