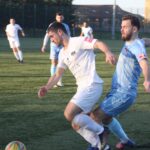 Following a pitch inspection, this game has been postponed. The website will be updated as soon as a new date is announced.

Third time lucky. After two postponements (and a short notice friendly), the Moles travel to Northwood FC in the Isthmian South Central Division.

A team was formed in Northwood back in 1899 but Northwood FC in its current form is believed to have been founded in 1926. Their initial history is unclear but they joined the Harrow & Wembley League in 1931 where they won an impressive six titles in a row prior to World War 2 and three more titles after the war. They spent the 1950s and 1960 playing mainly junior-level football.

Last season, it was the away team that came away with the honours. The Moles coming away with a 3-0 victory away but then losing 1-0 in the reverse fixture at Hill Farm Lane.

Both teams games were called off on Saturday due to the weather. However, the Moles managed to schedule a friendly against Step 3 side Hayes & Yeading FC.

Northwood sit in 2nd place, one place behind leaders Basingstoke Town whilst the Moles in 7th but with games in hand over the teams above them. 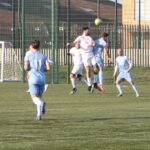 Following the postponed of the Moles game against Hanworth Villa and that of Hayes & Yeading against Bracknell Town, a friendly was arranged between the two sides on the 3G pitch at the SkyEx Community Stadium.

Daisy Spiers travelled to West London to photograph the Moles against Hayes and Yeading who currently sit 8th in Southern League Premier South – one step above the Moles.

The first half was evenly matched and at half-time was 0-0. However, in the second-half, Hayes showed their experience and finished 3-0 winners.

After the game, Moles Chairman Andy Cotton commented “We were delighted to be offered a friendly game this afternoon at Hayes & Yeading where both sides were able to field their 1st Teams. Both squads of players given the opportunity to play a competitive game with both clubs keen to keep their respective sides sharp whilst league games are called off during this cold snap. Many thanks for hosting the Moles today – very good close encounter that keeps our confidence high going into our next league game on Tuesday where we play Northwood”