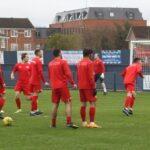 The game has been postponed due to a frozen pitch, as a result of this morning’s pitch inspection. This match has been moved to the 28th February at 7:45pm.

Any tickets purchased in advance will be valid for the rearranged fixture.

After the disappointment of the postponement of the game against Uxbridge midweek, the Moles are back in home action against Hanworth Villa FC.

Hanworth Villa FC were founded in 1976. They played in various West London leagues, making their way up the football pyramid before being promoted to Division One of the Combined Counties League in 2002-03. The club were Combined Counties Premier Division North champions in 2021–22, earning promotion to the Isthmian League.

You may notice a familiar name on the team sheet;

The away game at Hanworth finished 2-2 back in November.

Last weekend, the Moles beat promotion rivals Chertsey Town 2-1 whilst Hanworth haven’t played since the 7th Jan when they drew 2-2 with Uxbridge. The Moles currently sit in 7th place on 34 points whilst Hanworth are 11th on 28 points.