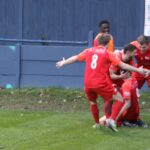 Binfield found a way to all three points against another one of their Isthmian League South Central playoff rivals Chertsey Town on Saturday afternoon. The Moles arrived at Alwyns Lane with no recognised centre-back, with Liam Gavin missing out. The victory means the moles are just two points behind 5th placed South Park, who also claimed all three points as they hosted Leatherhead.

With a 500+ crowd, it was important to start on the front foot, and the moles did exactly that as James Beauchamp had the ball in the back of the net after just two minutes, only for it to be ruled out for offside, mid knee slide.

It didn’t take long for the Moles to have the ball in the back of the net again, this time it was Brad Pagliaroli who scored his 8th goal of the season and put himself at the top of Binfield’s goalscoring chart.

Chertsey responded in double quick fashion, as Johnathan Hippolyte managed to poke the ball home from close range, after a save from Harvey Rackley-Hayes, just two minutes after the Moles opener.

The Moles started the second half bright, and it was Beauchamp on the scoresheet as he slid the ball under the goalkeeper, after some excellent football to restore the Moles’ lead just five minutes into the second half. This was James’ 5th goal of the season for the Moles and he proved again how crucial he can be to this Binfield side.

It was Chertsey who were able to put a bit of pressure on the moles, but despite this, didn’t really challenge Rackley-Hayes in the Binfield goal. It was resolute defending from the moles, with Hobbs and Bayley performing well together as a centre defensive partnership for the first time. 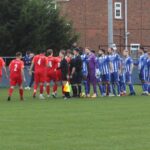 Daisy Spiers was there to photograph the game against in-form Chertsey Town. The Moles came away as 2-1 winners.