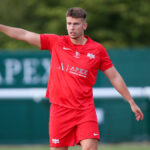 It’s a very happy New Year for Binfield supporters with no less than five home fixtures for the First Team across January 2023.

What with a number of postponements in January including Basingstoke Town and Uxbridge, those games have been moved into what is now a hectic opening month of 2023 for Garry Haylock’s men.

The Moles will play Ashford Town, Guernsey, Uxbridge, Hanworth Villa and Basingstoke at Hill Farm Lane with a further two matches away at Chertsey Town and Bedfont Sports.

See a full list of fixtures for Binfield here.

Three of the matches are against teams above the Moles in the league table so offer a great opportunity for the team to climb the table – the games against Basingstoke and Southall stand out as plumb ties and tests.

All games are Pitching In Isthmian League South Central Division One ties and are available for advance online ticket purchase in our ticket store here.

A note for visiting fans, any supporters who purchased tickets for the original ties that were postponed will not need to purchase a new ticket, simply show your existing purchase at the gate for the re-arranged game.