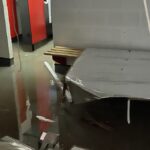 Binfield FC is disappointed at the response from a small section of non league football supporters regarding the postponement of Friday night’s planned fixture between the Moles and Basingstoke Town.

As a club, we are upset to hear some of the comments regarding our postponement tweet at mid-day yesterday, especially after Basingstoke Town’s support throughout the week, and the support when re-arranging the fixture to the 23rd to allow for increased convenience for both sets of supporters and playing staff.

After the tough week the club has had after finding two pipes burst in the changing room and the club house, and the effort our volunteers had put in to get our facilities to a suitable standard to host an Isthmian League fixture, the one thing that was out of our control was the weather.

We would like to assure all supporters that their pre-purchased tickets will be honoured for the re-arranged fixture, which will be communicated as soon as a date is agreed with Basingstoke and the Isthmian League as soon as possible.

As a club we were looking forwards to last night’s match as much as all supporters, as it promised to be an entertaining fixture and would’ve allowed for everyone to get their football fix pre-Christmas.