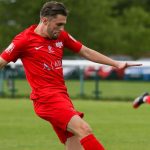 Binfield FC can this morning confirm the departure of midfielder Liam Tack to neighbours Bracknell Town.

‘Tacky’ will team up again with former Moles managers Carl Withers and Jamie McClurg, and he goes with our best wishes, making a step up in division.

Liam joined us in the summer of 2021 from Thame United for our maiden Step 4 season in the Isthmian League. He played 62 times for the club scoring 10 goals over a season and a half at Hill Farm Lane.

Next up for the Moles though, it’s the small matter of Leatherhead at home as we look to build on Tuesday night’s terrific 4-1 league win over Tooting & Mitcham United. Tickets are available in advance here. 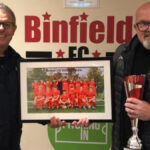 On Tuesday night Binfield chairman Andy Cotton was presented with the trophies the club’s under 18s Spitfires side won during the 2021/22 season in the East Berks Football Alliance.

The trophies were presented by the current u23s manager Andy Harvey who last season was in charge of the side that won the EBFA Division One league and cup double.

Mr Harvey presented the trophies along with a framed photo for the clubhouse wall.

He said: “It was the success of last season’s u18s that prompted the u23s to be established earlier than originally expected and five of the Spitfire lads are in the u23 side – Thomas Harvey, Zac Baker, Luke Territt, Aaron Reed and Charlie Martin. Both Thomas and Zac have been with the club since Soccer School. 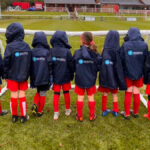 The under 8s Jets at Binfield FC are looking very smart in their new training jackets sponsored by NR Supply.

The team took a moment to pose recently in their new apparel and look very smart.

We’d like to thank specialist recruitment firm NR Supply for their support of the team. If you’d like to find out more about them visit www.nr-supply.com 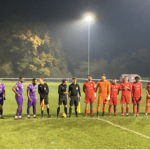 Following the 4-1 win over Tooting & Mitcham, the Moles have the second of three home games in a week with the visit of Leatherhead in the Isthmian League South Central Division.

The merger club won the Surrey League four times in a row before moving across to the Metropolitan and District league in 1950.

In the 1970s, they had several runs deep into the FA Cup. In 1974, they beat Colchester in the 2nd round, Brighton in the 3rd round before losing 3-2 away at Leicester City despite being 2-0 up.

They struggled in the early 1980s and were relegated down to Isthmian Division 2. In 2011, they had an extra time win over Dulwich Hamlet to take them back into the Premier Division. They only survived for one season before being relegated back to Division One South. Another promoted via playoffs and relegated places them into the South Central Division.

Leatherhead are a new team to the division this year so there are no recent head to heads. They come into the game after a 2-0 defeat to Marlow in the League. Although they did beat Premier Division side Kingstonian 2-1 in the league cup. They currently sit in 15th place in the league just two places outside of the relegation play-off zone. 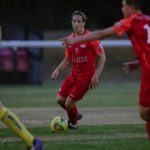 A fantastic first half including four goals for the Moles is more than enough to see them see off Tooting and Mitcham who, despite a consolation goal, couldn’t rally the troops for a comeback. It was a classy display, especially from winger Jonny Efedje who put himself top of Binfield’s goalscoring table, taking his total to 8 goals for the season.

Two goals for winger Jonny Efedje, a rare half volley strike from Liam Gavin and a cool finish from Massimo Giamattei saw the moles bounce back from their defeat to Southall on Saturday. The win see’s the Moles move above Hanworth Villa to ninth.

It was then a Liam Tack corner, played to the edge of the six-yard area, which put the ball on a plate for Efedje again, and he rose highest to double the Moles’ advantage.

Just minutes later, it was newly appointed captain Liam Gavin’s turn to join Jonny on the scoresheet as after a half clearance from the Tooting defender, he was quickest to react as he smashed the ball home past the outstretched James Shaw.

The Moles were on top and they took full advantage as they struck again, this time through Massimo Giamattei who superbly met Efedje’s cross to strike home a third goal in 10 minutes to put the Moles firmly in the driving seat going into half time.

The Moles came out for the second half and managed the game superbly and allowed Tooting to chase the game (and the ball for a most part.) Tooting did however get what they deserved as they pulled a goal back through their number 9, Cory Walters-Wright just 10 minutes into the second half. It seemed too hard of a task for Tooting as they struggled to create any more real threat to Grace’s goal which meant Binfield were able to see out a fantastic 4-1 victory at Hill Farm Lane.

The Moles now have another 2 home games on the bounce as they face Leatherhead on Saturday, as well as Sutton Common Rovers on MONDAY night.