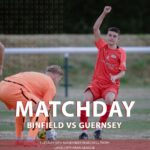 THIS MATCH HAS BEEN POSTPONED DUE TO A WATERLOGGED PITCH. NEW DATE TO BE ADVISED.

Like buses, after 4 away games, we only had to wait 4 days before another home game. The visitors to Hill Farm Lane this time are Guernsey.

In the corresponding fixture last season, the score was 1-1 with Liam Tack scoring a penalty. The reverse fixture at Footes Lane finished with the Moles beating the Green Lions 3-1.

Tickets can be purchased on the gate or in advance via Ticketpass.