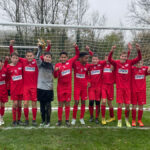 The Reds had an early kickoff on the other side of Reading at the weekend.

The boys started well with James Gilbert netting the first followed 20 minutes later with an excellent headed corner by James Fisher off of a brilliant Finlay Cole delivery.

From then on we had to weather a bit of a storm and our opponents were awarded a penalty for a handball. They came in 2-1 up at half time.

Then we dug in, the boys worked extremely hard, communicated well ( big achievement), our keeper Danny Mousley made some awesome saves and the team gave everything to secure the win.

They’ve had a tough start to the season but never give up, always support each other and todays win was the definition of teamwork.

Captain James Gilbert said “ We work hard every week and really deserved the win, Everyone was decent today!”

Binfield FC are opening applications from individuals directly regarding our vacant first team physio role. The applicant applying requires relevant qualifications to support our first team for the remainder of the season and beyond.

If you would like to apply for this position please send your CV and a covering letter to Andy Cotton via his email: binfieldroyal@gmail.com 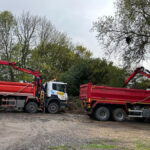 Following on from the club’s recent building projects you may have noticed we managed to build our own giant molehill in the Binfield FC car park!

Thankfully, local company, Design Build International stepped in and kindly offered to remove all of the building spoils from our site.

Vice Chairman Craig Gilbert said: “We cannot thank Sam Fowles and the team at DBI enough. Having only met with Sam at the weekend to discuss the removal of the waste, by Wednesday it’s all gone! No fuss, no messing about and the site has been left in great condition. We are truly grateful and now have space for at least another 30 cars. The regained land will make a huge difference to our Junior and Senior match day parking.”

This is the second project at the club Design Build International have helped with, having installed our fantastic brick paved area earlier in the year.

A massive thanks from all at the club goes to DBI, Sam Fowles and Nigel Cole for making all of this happen.

Want to know more about DBI? Head to designbuildinternational.co.uk

Take a look at our car park before and after