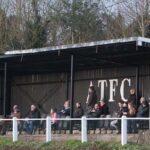 After a 400 miles round trip to play Tavistock AFC in the FA Trophy, the Moles are back on the road again. This time to visit Amersham Town in the Berks & Bucks County FA Cup.

Which league do they play in?

They are currently sitting second in the league behind Real Bedford FC (the crypto backed team) with only one defeat.

What is the Berks & Bucks FA Senior Cup?

The Berks & Bucks FA Senior Cup is for teams playing Steps 1-6 of the NLS & above and was first played in the 1878-79 season. In last seasons final, Reading’s Under-23 defeated Ascot United 4-0.

Route to the 1st Round

Binfield had a bye to the 1st round whereas Amersham Town had to play in the 1st and 2nd qualifying round.

The other fixtures in the 1st round of the cup are;

Where do Amersham Town play?

Amersham Town play at Spratleys Meadow which is at the edge of Amersham Old Town with open views out into the Chilterns.