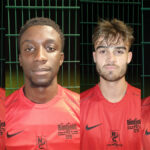 Binfield’s decision to relaunch an under 23 side in the summer is already bearing fruit with four youngsters involved in first-team activities in recent weeks.

Jake Fisher, Max Reid, William Mabukwa and Sam Applegarth have all been involved under new boss Garry Haylock and all four were in the squad for Tuesday night’s 2-0 win at Basingstoke Town in the Velocity Trophy with Reid, Fisher and Makubwa all coming on in the second half.

Reid and Fisher were also unused subs in the 3-1 defeat at South Park last weekend.

The Moles development side remain top of their Thames Valley Premier League division having won three and drawn one of their opening four games this season, but last weekends fixture at home to Finchampstead was postponed. 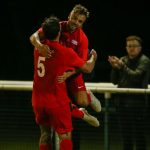 Legg was one of our Wembley FA Vase heroes having originally joined the Moles from Bracknell where he played alongside former boss Jamie McClurg.

Writing on his Twitter account, Legg left a lovely message for Moles fans: “Firstly, a huge thank you to everyone at Binfield FC. An amazing club, fantastic people, and the best group I’ve been a part of. What a few years it’s been. Some big moments, and unforgettable memories in there. I’ve loved every minute. DANCING IN THE MOONLIGHT. YOU MOLES.”

Binfield would like to thank Elliott for his time with Binfield and wish him all the best for the future.

There is news also of a couple of other former Moles as Jack Thomson-Wheeler has joined Combined Counties League side Bedfont Town while George Short has signed for Badshot Lea.