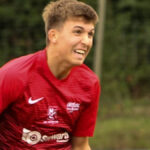 Binfield made progress in the Velocity Trophy – the Isthmian League Cup – on Tuesday night with a 2-0 win over Basingstoke Town.

Eddie Lee (who scored for Reading City at the weekend) and James Beauchamp were on target for a much-changed Moles side in a game that included debuts for three of the clubs under 23 players Max Reid, Jake Fisher and William Mabukwa.

The home side were hamstrung in the first half when Shaun Dallimore was sent off after 20 minutes and the Moles certainly capitalised.

Jack Craske’s match report from the fixture is here.

Next up for the Moles is an Isthmian League South Central tie at home to Walton & Hersham on Saturday. Tickets are available in advance via the Moles Ticketstore.

Binfield will play Sutton Common Rovers in the next round of the Velocity Trophy after they beat Three Bridges on penalties. Matches are due to be played by November 11th.