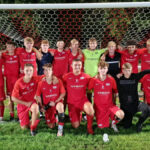 Binfield’s under 18 Allied Counties Youth League side made progress in the FA Youth Cup on Thursday night at Hill Farm Lane.

The young Moles made a ‘stoke double this week following the men’s First Team win at the weekend, beating Basingstoke Town 2-1 to reach the First Qualifying Round.

The First Qualifying Round matches are due to take place from Saturday 3rd September but as it stands there doesn’t appear to have been a draw made yet.

On the night, a clinical strike from Jamie Smith put Binfield 1-0 up before a second yellow card left the Moles with 10 players on the field. A second goal before half-time though from Ben Price gave a little bit of breathing room.

The second half saw a response from Basingstoke with Binfield having to dig in after the visitors earned and converted a penalty on 50 minutes.

It was very much ‘backs to the wall’ in the second period according to coach Martin Smith who added: “Every player put in a shift to keep our lead and we deservedly held on, we’re in to the next round!”

For more information on the young Moles this season checkout our longer interview with Martin here.