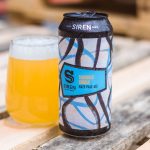 Preparations continue ahead of the eagerly anticipated visit of Truro City in the Buildbase FA Trophy on Saturday and Binfield are pleased to reveal an additional outdoor bar will be open at the ground for supporters.

The bar will primarily serve a range of locally brewed Siren Craft Brew cans but will also have other delights available for supporters.

Among the Siren beers we’ll have available, these include:

Binfield are competing in the Buildbase FA Trophy for the first time in the club’s history following promotion to step 4 of the English Football Pyramid in the summer.

The Moles have already beaten North Leigh on penalties in the Second Qualifying Round and defeated Cinderford Town 3-0 in the First Round on the 13th November.

Truro come to Hill Farm Lane as a step 3 side playing in the Southern League Premier Division South.

Tickets for the fixture (as well as our other forthcoming home fixtures) are available in advance on our online ticket portal here.