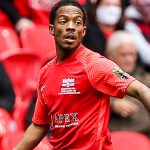 Binfield have made two additions to the clubs Isthmian League squad as managers Carl Withers and Jamie McClurg look to build on a great start to the season.

One player that will be very familiar to Moles fans is Kensley Maloney – a big star of the clubs run to the final of the 2020/21 FA Vase – and former teammate of both Withers and McClurg at Bracknell Town.

Maloney adds legs and no little skill on the ball to the midfield and has already appeared four times this season for the Moles, scoring in the 3-2 win over Sutton Common Rovers at the weekend.

Withers and McClurg have also added experienced midfielder Nathan Webb to the squad.