After watching on from the sidelines since the competition began, Binfield FC’s Physio Liam Day gives us an exclusive interview on how he’s been feeling, seeing the lads make it to Wembley.

So the lads are off to Wembley, How are you feeling?

“Firstly it’s all about the squad of players that has got us to this moment, they have been fantastic from our first training session back. The tempo and intensity during these sessions has been amazing. What Carl and Jamie have done is unreal. They have brought a real group of brilliant individuals together into a team that has so much togetherness and belief installed into a day we will never forget. For me, personally it is like a dream really. It will be an emotional day as I have so many memories there from Cup Finals with my Dad etc. Losing him in 2018 was the toughest moment of my life but I know he will be with us all Saturday and I am sure he would be shouting his usual ”Give it to Doddsy” and encouraging all the lads. That is why I can’t thank Carl and Jamie enough for bringing me into the fold here and allowing me to be part of this. But even though I am not actually playing, just to be part of this team has been amazing and I can’t wait for the day. To see family and friends cheering on the lads and at the home of football, it is going to be surreal. I can not wait to just sit there (on my cool box), watch the boys in action and get us over this last hurdle to what we set out to achieve when we all heard that football was back.”

What’s it been like watching on from the sidelines?

“For me it’s been great to see, so many emotions across all the rounds. I’ve seen some great football and also seen us dig deep and show what we are all about. From coming behind against Deal and Fakenham shows what the lads can do and it just brings an absolute buzz when we win, via 90 minutes or penalties. George Short asked me against US Portsmouth, how do I do this every game? I said I don’t know to be honest, but when the game kicks off I forget about the scenario and etc. It’s all about winning that game and I don’t care how we do it as long as we win. Fakenham stands out the most for me because to be losing twice and to show that character to bring it back and then of course the Cat (Gracey) comes up with the goods. We have our own little thing with penalties and that day meant so much because he passed everyone and came straight to me. That meant a lot especially as we are best mates as well. I have known a lot of the lads for some time now so I know what they can produce so I do enjoy watching it. Believe me if I was like 5 stone lighter and actually good then I would be hating watching from the sidelines (Ha Ha) but that is football and I am just one of the lucky ones to be involved in this group.  As for Wembley, fingers crossed it’s another 90 minutes where I can sit back, have a quiet game where there’s not a lot for me to do and I can watch with enjoyment seeing all my friends play at the home of football.”

What emotions run through you when Jack Broome scored the winning penalty for the Moles?

“It was a weird one for me, even when Sean missed his penalty (which is rare by the way), I was still calm and confident we would win because of who we have in goal, and then of course the calmest man on the pitch took 4th and as usual we all know the outcome when Doddsy steps up. But when Jack said in the huddle I will go fifth and no hesitation I knew we had someone who is experienced and can handle that pressure. You would have seen from the stream that after Chris saved the fourth I turned round to his Mum (Liz) and said ”1 More 1 More”. I am just so confident when it comes to that scenario. I would prefer to do every game in 90 minutes but we did it via penalties instead. Penalties are always hard because it’s a great way to win and it’s a relief but also a horrible way to lose and especially at that stage so I straight away went to their players and managers and was like well played, good game etc. But then afterwards the tears because of the reality of what we had done and this special group to have done it with.”

What motivates you the most about being Physio for the squad? (Aka Best ball boy in Berkshire)

“I wouldn’t say anything motivates me about being a physio except I get to watch and be part of this great squad, I get to see friends 3 times a week, have a laugh and get to watch some very good football. This is all about being a squad and it doesn’t matter if you have played every minute or just 30 seconds, we are together and that will never break. I know the lads appreciate what I do for them and don’t get me wrong when I hear ”Liam Liam Liam Liam” 400 times on a Saturday afternoon between 1:30 and 2, I do want to pull my hair out but I wouldn’t change a thing, well I say that maybe when I say can I have all the balls in but then I have to go round and collect them all from some of the shots ha ha. Being a physio is a tough job because in the end, the player know their bodies better than I do but I have to sometimes make those calls and tell Carl and Jamie that this lad or that lad is not fit for today and then that causes a headache but also it is hard because I then have to tell that player that they can’t play today and you can see it in some if their faces they are gutted but it’s all about their health at the end of the day and what is best of the team.”

And lastly, what are you most looking forward to in the next year?

“First thing I am looking forward to getting the supports back into the club who have not managed to see these games live on via streams on the internet. To have them back will be amazing and Saturday is for them as well as everyone else at the club from the juniors to the volunteers behind the tea bar and club bar. I am looking forward to seeing where this special group of players can actually go because I feel this is just the start of something. If we bring in some extra depth as the right fit then I am sure Carl and Jamie will make sure of that then next year could be an even bigger rollercoaster than the last 7 weeks we have been on. Like I have said previously, this really is a special group of players and a very special club. For me, togetherness is the key to any success at any level and we have that but the main focus for now is Saturday and winning one more game of football and bringing the Vase to Hill Farm Lane. UP THE MOLES!”

Tickets to the next Binfield FC fixture: 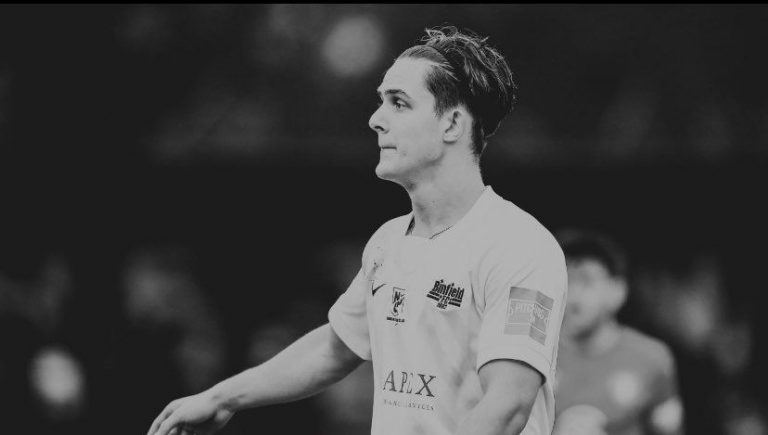 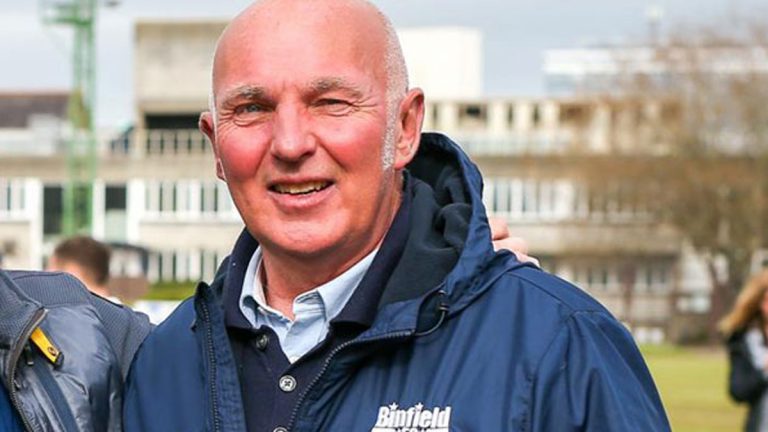 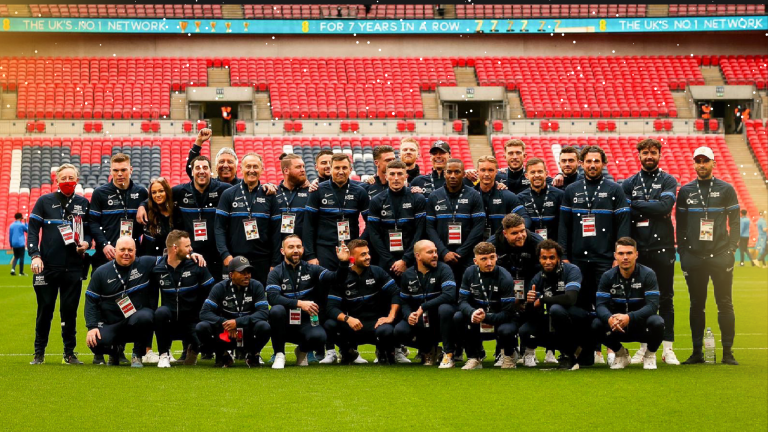 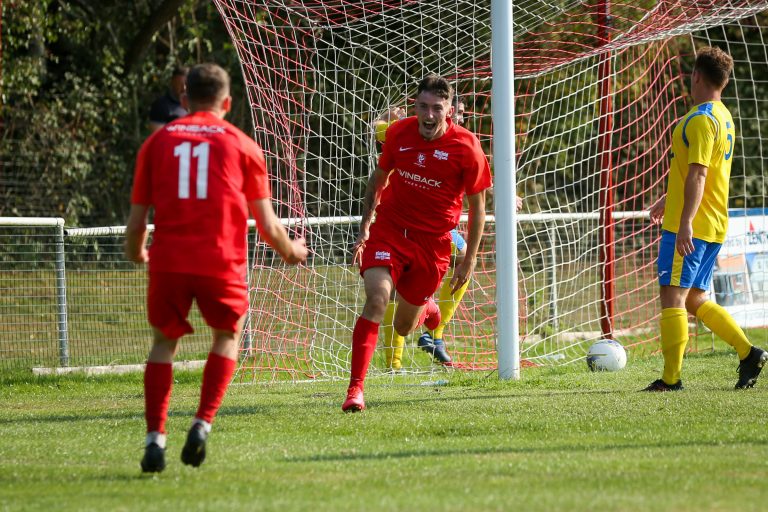 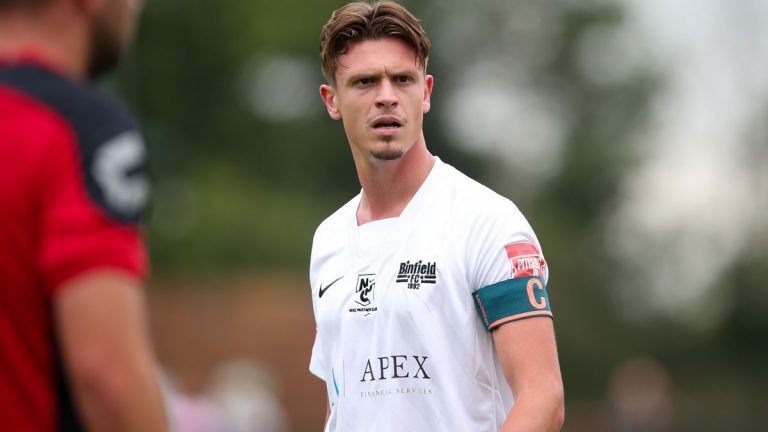